The Australian Hydrographic Office (AHO) is part of the Department of Defence. It is responsible for providing Australia’s national charting service under the terms of SOLAS and the Navigation Act 2012 (Cth). This role requires provision of nautical charting (including charts in electronic form) and associated services in support of maritime safety, the coordination and determination of policy and standards which cover both hydrographic surveying and charting, as well contributing to the coordination, exchange and standards related to maritime geospatial data in general. The AHO is also responsible for providing direct support to the Australian Defence Force (ADF) by providing hydrographic, charting, oceanographic and meteorology services. 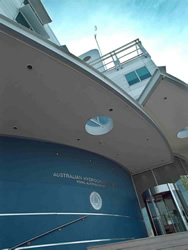 The AHO has its origins in the British Admiralty Hydrographic Office, which was established in 1795. The Admiralty carried out surveys and published charts of the Australian coast throughout the 19th century in support of the defence and commercial development of the colonies. The Royal Australian Navy (RAN) assumed responsibility for hydrographic surveys in 1920, and for the publication of charts in 1942. In 1946 the Federal Cabinet made the Commonwealth Naval Board responsible for the surveying and charting of Australian waters. This responsibility was confirmed in 1988 after a review of Commonwealth mapping activities.

Further information on the AHO can be found in the links below.